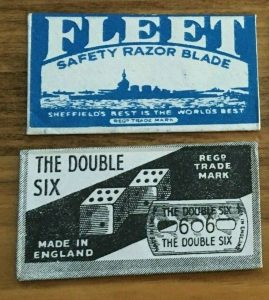 You may have come across people online selling these WW2 Escape & Evade razor blades yes? Well what are they? Are they real?

Well yes they are real, assuming they are not reproductions. I haven’t seen anybody make or sell reproductions as of yet, so if you find any they are more than likely original. They were made by the War Department during WW2 and were issued to soldiers as part of their normal personal field gear. They are real razor blades, but with different markings on the blade themselves. They were marked with the Broad Arrow (sometimes called a crows foot) and magnetised so the razor blade when put into water would point north, turning it into a basic compass.

There were various blade manufactures that produced these blades, normally alongside their regular blades. This is when it gets confusing because the wrappers for both the normal and military issue blades are exactly the same. You can only tell which they are by looking at the blades themselves.

I would like to add that I am talking about the British made WW2 razor blades, I don’t know the history of any others. I know the US issued razor blades to their soldiers, but I don’t think they doubled as a compass, but I need to research more into this.

I have been collecting razor blades for many years and from my own experience and research, the following brands of razor blades exist with military versions. However in some cases I have never seen the regular versions, so some may exist only in military form.

Many of these were made by the same manufacture, under different brands.

There may have been more, feel free to send me a message if I have missed some. I love learning new facts about the history of razor blades, these types especially.

See below for pictures showing the differences between regular and military issue razor blades:

The regular blade is the top, the military issue is the bottom one. Also note the wrapper doesn’t give you any indication that it special, this was how it was ‘hidden’ from prying eyes. I know these wrappers have some minor differences, they are just revision differences, I didn’t have two from the same revision to show side by side.

Latest From Our Blog